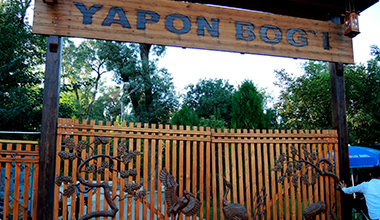 Japan is considered to be one of the most exotic, ancient and spiritually rich countries in the world. A special place in Japanese culture is occupied by gardens - a separate art form that skillfully combines the philosophical and ethical concept of the universe and the natural beauty of the landscape. Guests of NEC "Uzexpocentre" have a unique opportunity to visit a real Japanese garden, created in the best traditions of the Land of the Rising Sun. Pier by the lake

The pier near the old lake deserves special mention, which has become a favorite place for newlyweds and couples to walk. It is from here that cherry blossoms drop their petals onto the serene water surface, creating a unique atmosphere of natural charm. On the surface of the lake float, driven by the wind, water irises and hyacinths, and schools of ornamental goldfish circle in its depths. Natural harmony combined with oriental exoticism will be the perfect backdrop for a romantic walk or an unforgettable photo shoot on the eve of the wedding. In the Land of the Rising Sun, there is a special art of placing stones, known as Sute-Ishi. The Japanese believe that contemplating the rock garden, following the example of Buddhist monks, one can touch the innermost secrets of the universe, know one's soul and gain wisdom. The Sekitei Rock Garden, located on the territory of the Japanese Garden, was created in accordance with the traditions of the 14th century of the Zen Buddhism era. Carefully selected and correctly placed stones form compositions full of deep philosophical meaning that will appeal to seekers of natural peace and tranquility.

Up to 3 years free entry

The site has a voice reading feature, select the text you want to hear, and press the button
Нажмите на кнопку ниже, чтобы прослушать текст Powered by GSpeech